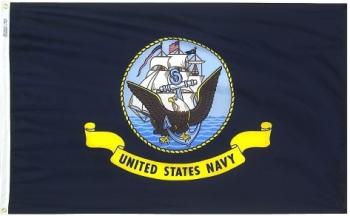 This is a high-quality outdoor nylon Navy flag for sale from All Star Flags. This official Navy flag is fully dyed for great outdoor performance. Four rows of stitching on the fly end make our US Navy Flags durable in all conditions. Navy Flags are finished with a canvas header and two brass grommets. All Star Flags is proud to have this American-made Navy Flag for sale here.
This dark navy blue official Navy flag features the seal of the Department of the Navy as the central image. The seal is surrounded by a circular yellow rope edging that helps visually set out the centered seal. The circular rope also adds to the nautical feel of the flag in a subtle manner. Written beneath the seal is "United States Navy" in dark navy blue lettering on a yellow scroll. The seal of the Navy was created in 1951 and added onto the flag two years later. It portrays an eagle with wings outspread, seemingly defending a ship at sea. Similar to the other branches of the military, the Navy also utilizes battle streamers to signify their major battles. There are 28 streamers that date from the Revolutionary War through Desert Storm. The Navy flag is third in order of precedence on occasions of public flag displays.

The official Navy Flags are made 4 feet 4 inches hoist by 5 feet 6 inches fly and trimmed with 2.5 inch gold fringe. The Navy Flag is not displayed with cord and tassels in official dress settings. It is also interesting to note that the US Navy Flag is not to fly from any vessels. The flags that fly from the vessels are the National Ensign, commission pennants, union jacks and naval jacks. In military procedure, the US Navy flag is only used in parades, ceremonies, official public gatherings with naval personnel and is not flown outdoors from a fixed mast or flagpole.