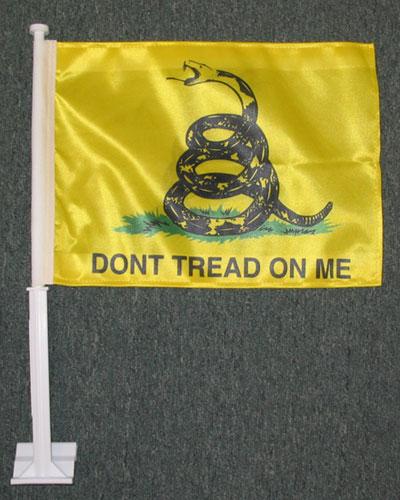 The Gadsden flag features the coiled snake with the legendary "Don't Tread on Me" slogan.  The Gadsden car flags are double sided and Made in the USA.

The Gadsden flag is associated with Christopher Gadsden, who was a delegate to the Second Continental Congress. He presented a flag to the Provincial Congress of South Carolina on Friday, February 9, 1776. The journal of the South Carolina congress describes the flag as "an elegant standard, such as is said to be used by the commander-in-chief of the American navy; being a yellow field, with a lively representation of a rattlesnake in the middle, in the attitude of going to strike, and these words underneath, 'DONT TREAD ON ME!' "