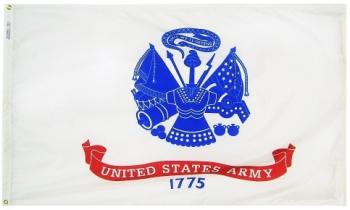 This is a high-quality outdoor nylon official Army flag for sale from All Star Flags. We have a United States Army flag for sale that's fully dyed for great outdoor performance. Four rows of stitching on the fly end make our Army Flags durable in all conditions. Our official Army Flag is finished with a canvas header and two brass grommets. All Star Flags is proud to have this American-made official Army Flag for sale here.
With a white background and a blue rendering of the official seal of the US Army, this military flag is classic and recognizable. The seal on the US Army flag goes back to the American Revolution, when it was used to authenticate documents from what was then called the War Office. It bears the year of the Army's establishment in 1775 and a rattlesnake (hearkening back to the "Don't Tread on Me" rattlesnake) holding a scroll with the words "This We'll Defend" in its mouth. Also included in the seal are a Revolutionary War American Flag, a liberty cap, a Roman cuirass, a musket, a cannon, a snare drum, mortar, a powder flask and two bomb shells. The US Army flag is to be displayed first of the American Services Flags in honor of its precedence in creation (it was the first service branch created by the United States Government).

Despite being the oldest branch of the military, the US Army was the last to have an official flag that represented the entirety of the US Army. The flag was officially created June, 12 1956 by Executive Order 10670 signed by President Dwight D. Eisenhower. The new flag was unveiled to the public two days later on June 14th at Independence Hall in Philadelphia. The current US Army flag for sale here was designed by the Heraldic Branch Office of Research and Engineering, Office of The Quartermaster General.

The official US Army flag is sized at 4 feet 4 inches on the hoist and 5 feet 6 inches on the fly with 2.5" yellow fringe. The formal presentation flag is to always carried with the National Colors and includes the display of a full set of Campaign Streamers. The Army Campaign Streamers are 2.75" hoist and 48" on the fly and represent each of the officially recognized campaigns the US Army has participated in since 1775. There are currently 187 Campaign Streamers that should accompany any official US Army Flag. When displayed, the Army flag will always be dressed with the full set of 187 streamers. The streamers should be arranged in such a manner so that the Lexington 1775 streamer is clearly displayed and then they continue counter-clockwise in the order they were earned until the New Dawn 2010-2011 streamer is also visible.

Show your support for the brave soldiers in our armed forces and buy this Army Flag for sale at All Star Flags today!