Archive for the ‘All Star Flags Product News’ Category

Confused about feather flags? Don’t understand the different styles and can’t decide if a feather flag is the right solution for your business? Check out our new feather flag guide.
http://www.allstarflags.com/facts/feather-flag-guide/

All Star Flags is pleased to offer our new Armed Forces Flag. This new flag features the official seals for the U.S. Army, U.S. Navy, U.S. Air Force, U.S. Coast Guard and U.S. Marine Corps. All five branches are represented on one flag to help show your support for all our service men and women. The Armed Forces Flags are made of 200 denier nylon and feature canvas header with brass grommets. The flags are finished with four rows of lock-stitching on the fly end for added durability. We have the new Armed Forces Flag available in three sizes: 2×3’, 3×5’ and 4×6’. The Armed Forces flag is available for immediate shipment in time for Veterans Day.
http://www.allstarflags.com/product/armed-forces-flag-nylon-3×5 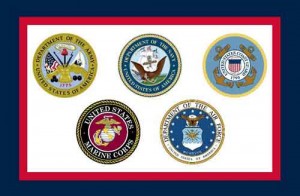 September 11, 2011 will mark the 10th anniversary of an event that will live on in our memories forever—the terrorist attacks on the Pentagon and World Trade Center.  That day in history changed so many lives on our soil and all over the world, and now, a decade later, we must never forget the thousands of American lives lost.

In order to honor the victims of that tragic day, Annin Flagmakers created the Flag of Honor which features the names of all those who perished on planes, at the Pentagon, and at the World Trade Center, and the Flag of Heroes which lists the names of all Emergency personnel who perished.  Annin will donate 10% of the net sales from these flags to organizations that offer support to the families of victims of this national tragedy.

Also to mark the anniversary, we are offering a September 11th red, white, and blue nylon streamer which reads “In Memory of the Heroes and Those Who Perished, Sept. 11, 2001” and a yellow and white “We Remember” streamer (while supplies last).    All Star Flags is proud to partner with Annin to mark this significant day in American history.

18- and 28-gauge steel poles are powder coated with electrostatically charged paint to create a coating that resists cracking, peeling, and corrosion.  The 3-inch ball on the top of each pole is made of solid hardwood, naturally tougher than the plastic ones found on many other flag sets.  And the 2-position bracket used in the house-mounted pole is made from recycled high-density polyethylene, tested to be 25% more durable than the nylon brackets commonly used in the market.  All of these elements combine to form a stronger, greener, American-made product available now at All Star Flags!

All Star Flags – Parts of a Flagpole

Attached is a video we made to help with understanding of basic flagpole parts and terminology.