American Flags to fly at half-staff Sunday, December 7th throughout the United States in honor of 2014 National Pearl Harbor Remembrance Day. We honor the lives of those that battled and perished in the dreadful attack on Pearl Harbor.

NATIONAL PEARL HARBOR REMEMBRANCE DAY, 2014
– – – – – – –
BY THE PRESIDENT OF THE UNITED STATES OF AMERICA
A PROCLAMATION

On the morning of December 7, 1941, Japanese planes thundered over Hawaii, dropping bombs in an unprovoked act of war against the United States.The attack claimed the lives of more than 2,400 Americans.It nearly destroyed our Pacific Fleet, but it could not shake our resolve.While battleships smoldered in the harbor, patriots from across our country enlisted in our Armed Forces, volunteering to take up the fight for freedom and security for which their brothers and sisters made the ultimate sacrifice.On National Pearl Harbor Remembrance Day, we pay tribute to the souls lost 73 years ago, we salute those who responded with strength and courage in service of our Nation, and we renew our dedication to the ideals for which they so valiantly fought.

In the face of great tragedy at Pearl Harbor — our first battle of the Second World War — our Union rallied together, driven by the resilient and unyielding American spirit that defines us.The millions of Americans who signed up and shipped out inspired our Nation and put us on the path to victory in the fight against injustice and oppression around the globe.As they stormed the beaches of Normandy and planted our flag in the sands of Iwo Jima, our brave service members rolled back the tide of tyranny in Europe and throughout the Pacific theater.Because of their actions, nations that once knew only the blinders of fear saw the dawn of liberty.

The men and women of the Greatest Generation went to war and braved hardships to make the world safer, freer, and more just.As we reflect on the lives lost at Pearl Harbor, we remember why America gave so much for the survival of liberty in the war that followed that infamous day.Today, with solemn gratitude, we recall the sacrifice of all who served during World War II, especially those who gave their last full measure of devotion and the families they left behind.As proud heirs to the freedom and progress secured by those who came before us, we pledge to uphold their legacy and honor their memory.

Americans to observe this solemn day of remembrance and to honor our military, past and present, with appropriate ceremonies and activities.I urge all Federal agencies and interested organizations, groups, and individuals to fly the flag of the United States at half-staff this December 7 in honor of those American patriots who died as a result of their service at Pearl Harbor.

IN WITNESS WHEREOF, I have hereunto set my hand this fifth day of December, in the year of our Lord two thousand fourteen, and of the Independence of the United States of America the two hundred and thirty-ninth. 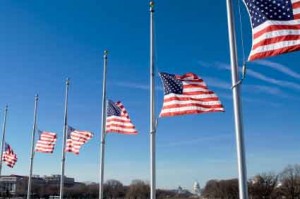