Archive for the ‘All Star Flags News’ Category

A neat story out of Fort Mill, SC where the local fire departments hung a 30×50′ American Flag above I-77 to welcome home a bus of DDAy? Veterans who were returning from last week’s 70th Anniversary events in France. 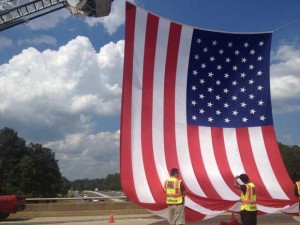 It’s #NationalFlagWeek leading up to #FlagDay2014 this Saturday, June 14th. Are you ready? We are! Make sure you have Old Glory flying high this week and especially on Saturday.
#AmericanFlags
#AllStarFlags 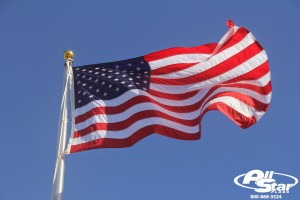 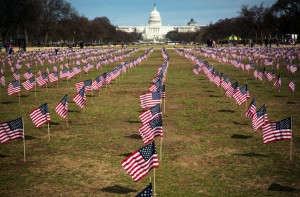 Knowing and practicing proper American Flag etiquette can save you and your company/agency a lot of grief down the line. Most examples of poor flag etiquette are accidents but they can still lead to PR nightmares for companies.

Brush up on all things flags anytime by visiting our Flag Facts page that we update constantly.  http://www.allstarflags.com/flag_facts/

See how this SC government department is paying the price for a flag mishap.

Flags Purchased by the Military Must be Made in The USA

Make sure to always check that the American Flags you purchase are Made In The USA like the ones we offer here at All Star Flags.

A great piece of legislation written by Congressman Mike Thompson was just passed that requires American Flags purchased by the Dept. of Defense to be Made in America.
#AmericanFlags
#MadeInTheUSA

Flag Use and Care Instructions

All Star Flags shares an instructional video on ways to properly care for your American Flags that was produced by Annin Flagmakers.
#AmericanFlags
#AmericanFlagCare
#FlagUseandCare

American Flag Use and Care Video

American Flag Use and Care Instructions

Keeping your flag out of inclement weather will certainly add life to the flag. Take a look at this large American Flag that was exposed to sleet and freezing rain. The ice/moisture froze onto the flag fabric and made the flag brittle which caused it to rip and tatter in a matter of 4-6 hours. This was from the ice storm this week here in Wilmington, NC.
#IceFlag
#AmericanFlag

Posted in All Star Flags News | Comments Off on Ice Flag

The History Behind Nautical Flags

Visit our Flag Facts page to see our newest article about The History Behind Nautical Flags.

Nautical flags were originally used for communications among comrades during military entanglements. What started as a limited communication system evolved over centuries into a comprehensive, internationally-recognized signaling system functional for military and non-military purposes. Recreational vessels also use nautical flags as well as code signal flags to identify themselves and to communicate with other ships. 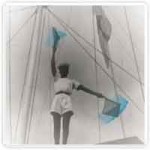 Previous Designs for the American Flag – All Star Flags

Visit our Flag Facts page to see our newest article about some of the Previous Designs of the American Flag.
#AmericanFlags
#USFlag

The people at www.10best.com (A division of USA Today), recently posted one of their surveys on the best State Flag Designs. Those that read the article and voted in the survey selected New Mexico as the best designed state flag. New Mexico was followed in the voting by: Colorado, Texas, California, New Hampshire, Arizona, Ohio, Alaska, Michigan and Kansas. Did your state make the list? The designs of many state flags are deep in traditions. Some flags feature state seals and motto’s while others feature symbols or particular color combinations. Ohio boast the only state flag that is not rectangular in shape and this could be what landed them on the 10 Best list. The Texas flag has long been a favorite of many people. All Star Flags was surprised to see Kansas, Michigan and New Hampshire on the list as these designs are some of the more typical for state flags. We were surprised that Hawaii, Oregon, Washington, Tennessee and South Carolina weren’t on the list. These flags are usually viewed as extremely popular designs.

To learn more about the origin of each state flag, read our article:  http://www.allstarflags.com/facts/state-flag-descriptions/ 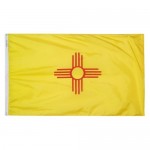