WHEREAS the State of Hawaii has this day been admitted into the Union; and

WHEREAS section 2 of title 4 of the United States Code provides as follows: "On the admission of a new State into the Union one star shall be added to the union of the flag; and such addition shall take effect on the fourth day of July then next succeeding such admission."; and

WHEREAS the Federal Property and Administrative Services Act of 1949 (63 Stat. 377), as amended, authorizes the President to prescribe policies and directives governing the procurement and utilization of property by executive agencies; and

WHEREAS the interests of the Government require that orderly and reasonable provision be made for various matters pertaining to the flag and that appropriate regulations governing the procurement and utilization of national flags and union jacks by executive agencies be prescribed:

NOW, THEREFORE, by virtue of the authority vested in me as President of the United States and as Commander in Chief of the armed forces of the United States, and the Federal Property and Administrative Services Act of 1949, as amended, it is hereby ordered as follows:

Part I — Design of the Flag
Section 1.  The flag of the United States shall have thirteen horizontal stripes, alternate red and white, and a union consisting of white stars on a field of blue.
Sec. 2.  The positions of the stars in the union of the flag and in the union jack shall be as indicated on the attachment to this order, which is hereby made a part of this order.
Sec. 3.  The U.S. flag dimensions of the constituent parts of the flag shall conform to the proportions set forth in the attachment referred to in section 2 of this order. 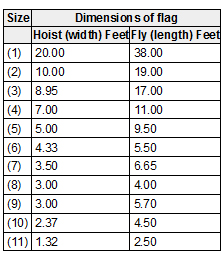 Part III — General Provisions
Sec. 31.  The flag prescribed by Executive Order No. 10798 of January 3, 1959, shall be the official flag of the United States until July 4, 1960, and on that date the flag prescribed by Part I of this order shall become the official flag of the United States; but this section shall neither derogate from section 24 or section 25 of this order nor preclude the procurement, for executive agencies, or flags provided for by or pursuant to this order at any time after the date of this order.
Sec. 32.  As used in this order, the term "executive agencies" means the executive departments and independent establishments in the executive branch of the Government, including wholly-owned Government corporations.
Sec. 33.  Executive Order No. 10798 of January 3, 1959, is hereby revoked. 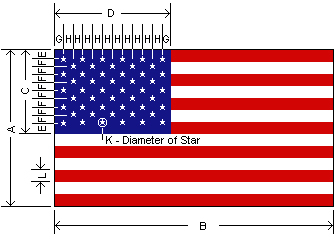 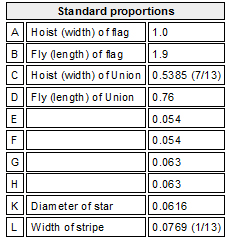