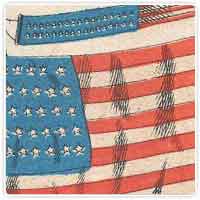 The History of Military Flag Emblems

What all military flags have in common is their own specific emblem that serves as the centerpiece of the flag. Flags such as those for the Army, Marines, Navy, Air Force, and Coast Guard have a unique emblem design and theme, yet there are commonalities regarding symbolism of traditions, power, and strength.

The American Flag has been honored by millions. It represents each state with its own star, within a blue rectangle in the corner. The thirteen stripes, alternating in red and white, represent the original colonies. Each color has a meaning too: white means purity and innocence, red is for valor and bravery, and blue is representative of vigilance, perseverance, and justice.

While the significance and symbolism of the Flag of the United States is widely known, the five branches of the military also have their own symbols and emblems. These American service flags are representative of the country’s rich history and the struggles which have been undertaken to protect the nation and its people. Each military flag has an emblem with similarities and differences to that of its counterparts.

The bald eagle has been an emblem of the United States since the late 1700s. Representing strength and power, it is featured on many military flags, coins, and the Seal of the United States. The eagle featured on the Marine Corps emblem is a crested eagle, which is common all over the world; the eagle on this emblem therefore indirectly represents United States military service in any part of the globe. An eagle on the Navy seal seems to be defending a ship, while it is framing the stars of the military’s three branches on the Air Force flag. The eagle is a universal symbol of power and authority.

A fouled anchor, one with a chain draped around it, is featured on many military flag emblems. It is an anchor which has been caught on an obstruction undersea, and has represented the trials and tribulations of the Chief Petty officer. In the US Navy, the fouled anchor stands for Unity, Service, and Navigation.

The Coast Guard flag features the statement, “Semper Paratus” on the bottom, above the date – this is Latin for “Always Ready”. Similarly, the Marine Corps emblem is graced with the Latin phrase, “Semper Fidelis” meaning “Always Faithful”.

A scroll, held in the eagle’s beak, is featured against a scarlet and blue background. “Department of the Navy – United States Marine Corps” encircles the entire emblem. Words have been carefully selected on emblems, that help to identify both the organization and what it stands for.

The Marine Corps flag features an eagle, globe, and anchor insignia. Approved in 1868, the emblem became part of the official seal of the Marine Corp after final approval by President Dwight D. Eisenhower in 1954.

It was then that the bald eagle, native to North America, replaced the original crested eagle. The emblem stands for the dedicated Marines that represent pride, honor, integrity, bravery and tradition.

It is believed the elements of the insignia originated from parts of military ornaments worn by Continental Marines and the British Royal Marines. The eagle wasn’t added until 1834, but an anchor was featured on a device worn by Marines as early as 1776. The current flag features a fouled anchor intersecting a globe, with the western hemisphere visible and an eagle mounted atop. 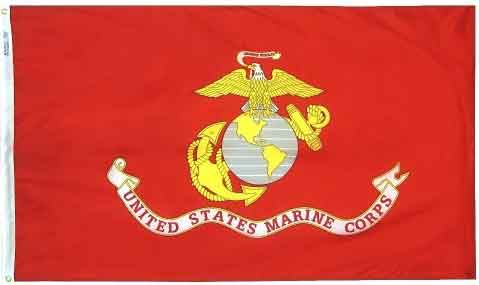 The flag of the U.S. Navy also features an eagle; its wings are outspread to suggest it is defending a ship at sea. The US Navy emblem includes a circular rope surrounding the central insignia, while the words United States Navy are presented in blue letters on a yellow scroll and battle streamers represent major battles in history.

The predecessor to the Navy flag, the US Navy Infantry Battalion flag, also had a dark navy blue background. There was an anchor centered within a white diamond, with the name of the naval organization written above this and the location below. The modern day seal of the Navy appeared in 1951, and was integrated with the flag two years afterward. 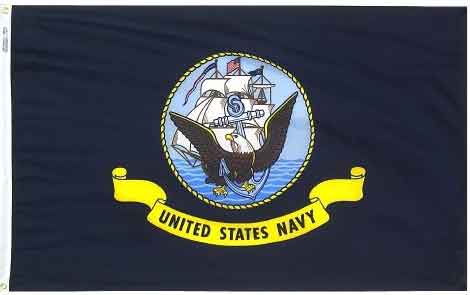 An Eagle and scroll are symbolized on the Air Force flag. A meaningful alternative to some of the company’s other flags; it features the Air Force coat of arms, highlighted among an ultramarine blue background. The 13 white stars represent the original colonies, while the outstretched wings of the bald eagle frame three of these, representing the National Defense establishment’s three branches – the Army, Air Force, and Navy. The flag and symbol was approved in 1951 and remains the same today.

Both the eagle and the thunderbolt image on the shield represent the air power of the United States. The blue, yellow, and gold coloring is consistent with earlier Air Corps traditions and the transformation into the modern Air Force. 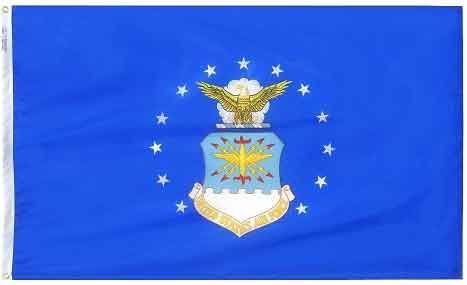 As other military flags do, the Coast Guard flag has an eagle as its centerpiece. It has a white background with a banner, “United States Coast Guard” printed on top, while a shield on the eagle’s breast features a blue chief, set over vertical white and red stripes. The date 1790 is still printed on the emblem; this is the date the Revenue Cutter Service, which later became the Coast Guard, was founded. Formed in 1915, the Coast Guard has retained the same imagery. 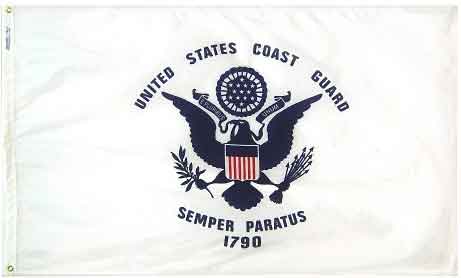 Prior to 1956, the Army was the only military branch that was without a flag to represent the entire service.  On June 14th of that year, the flag of the US Army was unveiled to the public.  The flag features a white background, with “United States Army” written on a red scroll and the original War Office seal above it in blue, with the year of the Army’s creation, “1775,” at the bottom in blue.

The War Office seal features a wide variety of symbols and imagery that all represent the mission and drive of the US Army, with “This We’ll Defend,” the motto of the US Army centered at the top of the seal guarded by a rattlesnake, which was a popular symbol during America’s colonial times.  Featured in the center of the seal and a key element of the emblem is a Roman cuirass which symbolizes the US Army’s strength and their mission to protect America.  The cannon and mortar flank the cuirass and represent the force of the US Army, while the Phrygian cap supported by an unsheathed sword stands for liberty, as well as the Army’s constant preparedness to protect and defend the United States of America. 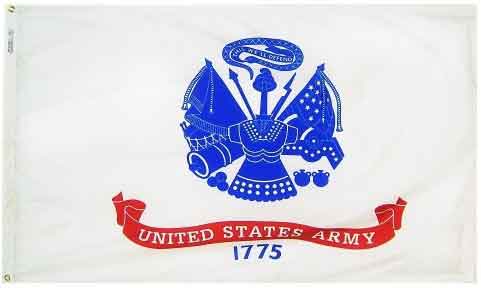 As it has been demonstrated, military flag emblems represent often common themes related to the history and power of the organizations they represent. They are as identifiable as the American flag itself. The symbolism is rooted in the strength of the United States itself, including the bald eagle, stars, and other items such as scrolls and shields.

The flags of the US Navy, Marine Corps, Air Force, Coast Guard, and other organizations are featured on All Star Flags. The family owned business has over 30 years of experience in the flag industry and is committed to stocking high quality flags and accessories from all over the world.