As our fledgling country was evolving and trying to establish an identity of its own, so, too, were the different armed forces that would be needed to protect it. Along with the evolution of a national ensign for the country, the “Stars and Stripes,” came the need to develop a way to identify each of the military service branches through the adoption of unique American military flags.

Before 1956, the U.S. Army was the only branch of the Armed Services without a flag to represent it as a unit in joint service ceremonies. Based on this need, several designs were developed, and the Secretary of the Army Wilber Brucker selected the design as you see it today. The U.S. Army flag was officially adopted by President Dwight D. Eisenhower in 1956. With a white background and a blue rendering of the official seal of the U.S. Army, this military flag is classic and recognizable. The seal on the U.S. Army flag goes back to the American Revolution, when it was used to authenticate documents from what was then called the War Office. It bears the year of the Army's establishment in 1775 and a rattlesnake (hearkening back to the "Don’t Tread on Me" rattlesnake) holding a scroll with the words "This We’ll Defend" in its mouth. Also included in the seal are a Revolutionary War American Flag, a Roman cuirass, a musket, a cannon, a snare drum, mortar and two bomb shells. The US Army flag is to be displayed first of the American Services Flags in honor of the Army’s precedence in creation (it was the first service branch created by the United States Government). As is the case with several other military branches, streamers representing campaigns fought by the Army throughout our country’s history may be flown with the flag.

Although information about the flags carried by the first American Marines is sketchy, it is likely that the Continental Colors, or Grand Union flag, was carried as the official flag of the American naval forces as designated by the Continental Congress in 1776. It has also been reported that the bright yellow Gadsden flag (“Don’t Tread on Me”) was carried during these early days of the Marine Corps. During the early to mid 1800s, Marines carried a white flag with gold fringe featuring a depiction of an eagle, an anchor, and the words “To the Shores of Tripoli” across the top. Later during this period, the legend was changed to “From Tripoli to the Halls of Montezumas.” After the Civil War, a flag closely resembling the American flag was carried by the Corps. On it were an eagle perched on a shield with 29 stars and the words “U.S. Marine Corps” embroidered in yellow on the middle red stripe. (This practice was stopped in 1921, and all such flags were removed from circulation within a year.)

In 1868, the first official Marine Corps emblem was adopted featuring an eagle and a globe signifying service on land and sea. A ribbon in the eagle’s beak carried the motto “Semper Fidelis” meaning “Always Faithful” in Latin. By 1914, this military emblem was featured on a blue flag with a laurel wreath and “Semper Fidelis” on a scarlet ribbon below. A flag similar to the 1914 flag, called “Old Blue,” was used by the Marine Corps 4th Regiment with a scarlet ribbon at the top that read “Fourth Regiment” and one below that read “U.S. Marine Corps.”

Finally, the colors gold and scarlet were designated as the official colors of the U.S. Marine Corps in 1925, and these colors were reflected in a new design of its flag in 1939. It is a scarlet flag with the Corps emblem in gray and gold and the words “United States Marine Corps” below. This design is essentially the Marine Corps flag of today. As is the case with several other branches of the military, battle streamers commemorating achievements in military encounters may be flown with the flag.

The earliest flags in use by our nation’s naval ships were representative of our country’s evolution in adopting an official national ensign, the “Stars and Stripes.” As was the case with several other military branches, early ships flew the Grand Union flag, in addition to those with a pine tree or a rattlesnake on them. The first unofficial flag of the U.S. Navy, the Infantry Battalion flag, was introduced toward the end of the nineteenth century and was in use for more than sixty years. This design featured a white diamond with a blue fouled anchor centered on a field of blue.

After several evolutions of designs for a seal, an official seal of the U.S. Navy was created in 1957, and it would become the main feature of the official flag of the Navy two years later. This dark navy blue flag features a yellow banner with the words "United States Navy" written below the seal. On the seal is an eagle with wings outspread, seemingly defending a ship at sea. Similar to the other branches of the military, the Navy utilizes battle streamers to signify its major battles. There are 28 streamers that date from the Revolutionary War through Desert Storm. The Navy flag is third in order of precedence on occasions of public flag displays. 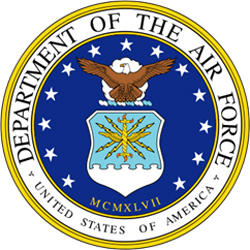 An official seal for the Department of the Air Force was created as a result of the National Security Act of 1947. By 1949, plans were underway to develop an official flag to be the Air Force counterpart to the U.S. Army flag. The design for the Air Force flag would bear the shield and coat of arms from the Air Force seal on an ultramarine blue field. It is surrounded by 13 white stars that represent the thirteen original colonies and above the coat of arms is the Air Force crest. The crest contains a bald eagle whose wings frame three stars to represent the three branches of the National Defense establishment, which are the Army, Air Force, and Navy. Beneath the coat of arms is a scroll with the words “United States Air Force” in gold. Fourth in ceremonial order, this flag was approved in 1951 and has not changed since. As is the case with several other branches of the military, battle streamers commemorating achievements in Air Force encounters may be flown with the flag.

The U.S. Coast Guard, one of the oldest organizations of the federal government, is unique to the other service branches in that it has two official flags. In 1790, the Coast Guard predecessor, known as the “Revenue Cutter Service,” was established to enforce tariff and trade laws and prevent smuggling. In 1799, the “revenue ensign” was adopted to identify these cutters and serve as a distinctive sign of a vessel’s law enforcement authority. This flag featured “sixteen perpendicular stripes, alternate red and white, the Union of the Ensign to be the Arms of the United States, in dark blue, on a white field.” (There were 16 states in the Union at this time.)

In 1910, a blue and white emblem was added to the fly end to distinguish it from ensigns flown from customs houses. The current version of the Coast Guard ensign dates to 1966 when the coat of arms in the canton was made to conform to the great seal of the United States. The ensign is never carried at a parade or military ceremony.

Very little information is available about the origins of the Coast Guard standard. Some evidence suggests that the Revenue Cutter Alexander Hamilton flew a flag similar to today’s Coast Guard flag as early as 1840. The flag features a white background with the Great Seal of the United States and a banner that reads “United States Coast Guard” above it. Below it are the words “Semper Paratus” meaning “Always Ready” or “Ever Ready” and the date “1790.” The Coast Guard standard is used for parades and military ceremonies and streamers representing campaigns fought by the Coast Guard throughout our country’s history may be flown with the flag.