The United States of America was formed through great trials, bravery, and well-earned triumphs.  The white stars and red and white stripes of the American flag serve to symbolize and canonize that effort; however, the American flag has not always appeared as it is known today.  Early American flag designs featured different numbers of stars, unique American flag layouts, and obscure symbols that represented the country’s transformation into the current-day United States American Flag.

The Evolution of Old Glory

The red represents hardiness and valor; white symbolizes purity and innocence, and blue stands for vigilance, perseverance, and justice on today’s American flag of 13 red and white alternating stripes and 50 white stars on a sea of blue.

Flags to Represent a Growing Nation

As we all know, the United States of America was formed through a great deal of adversity.  As America was forged, American flag designs gradually evolved to become the banner of glory U.S. citizens know and salute today.

Many attribute Betsy Ross for making the first American flag, though there is no proof to support this.  Regardless, Ross is one of the most famous Old Glory makers for the infant United States.  In 1870, a relation of Ross’ reported that the flag-maker was commissioned by General Washington and a Congressional committee to make a flag from a drawing.  Betsy Ross’ flag has the white stars arranged in a circle in the top left corner of the flag atop a canvas of blue.  Similar to today’s version, the Betsy Ross flag of 1776 also features 13 alternating red and white stripes to represent the original 13 American colonies.  Despite the debatable nature of the validity to the Betsy Ross legend, the Betsy Ross flag as we know it today was known to have been in use by 1777.

In 1777, the Continental Congress passed the first Flag Act as a means to establish an official American flag design for the newly formed United States. The Act established that the U.S. flag would be comprised of thirteen stripes, alternating red and white, and the union would be thirteen white stars on a field of blue symbolizing a new constellation.

This was probably a good idea as raising the Grand Union standard bore image of the then-enemy’s symbol.  Thus, the American flag design we know as the Stars & Stripes  came to be.  In 1794, two more stars were added to the flag’s original 13 to accommodate the addition of Vermont and Kentucky to the Union.  This would not change until the Flag Act of 1818 was enacted, whereby the number of stripes was to remain at 13 to represent the original colonies, while the number of stars was to match the number of states currently in the Union.

Prior to the declaration that would add more stars to the flag, the Star-Spangled Banner flag was created. This 30 x 42 foot garrison flag made by Mary Pickersgill and three others featured the trademark red and white stripes and fifteen staggered stars atop the blue canvas on the top corner of the flag.

Not all American flags resemble the Old Glory as we know it today, as colonies, states, citizens, and organizations were once able to create their own American flag.   As a result there are several different American flag designs that still represent our nation’s founding principles, regardless of their unofficial status. 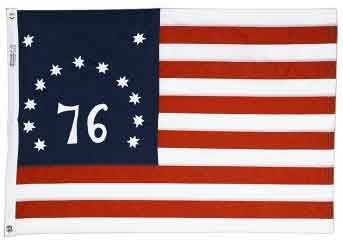 Even more obscure than the Bennington Flag is the Taunton Flag.  This flag flew just before the outbreak of the American Revolution. 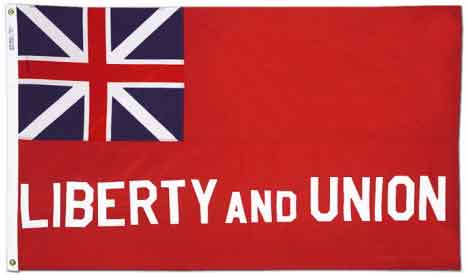 The First Navy Jack Flag depicts the red and white stripes across the flag with a yellow and red snake lying across it on a diagonal with the “Don’t tread on me” text printed beneath it.  Although there is widespread belief that the Continental Navy flew this flag, there is no substantial evidence to confirm it.    The rattlesnake first appeared as a symbol of the 13 original colonies around the time of the Seven Years War (1756-1763) usually appearing with “Don’t Tread on Me,” and by the time of the Revolutionary War was a common symbol for the United States, representing its independent spirit and resistance to tyranny.

Derived from the First Navy Jack, another American flag that also features a rattlesnake and that has seen a resurgence in popularity in recent years is the Gadsden Flag.  This American flag design depicts a coiled American timber rattlesnake poised atop a yellow canvas with the text “Don’t tread on me,” printed beneath it. 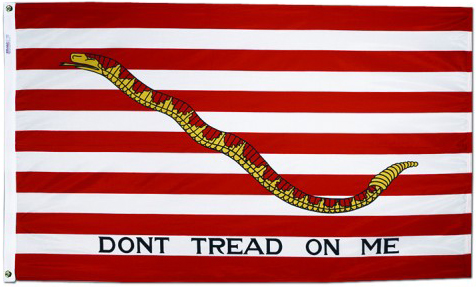 Though the Gadsden Flag bears no resemblance to any of the official American flags throughout history, it does symbolize what America stands for.  Patterns and designs change over time. However, the spirit and intent for which they have been sewn remains consistent.  Since its inception, the American flag has been a symbol of freedom and bravery and it will continue to represent those virtues. 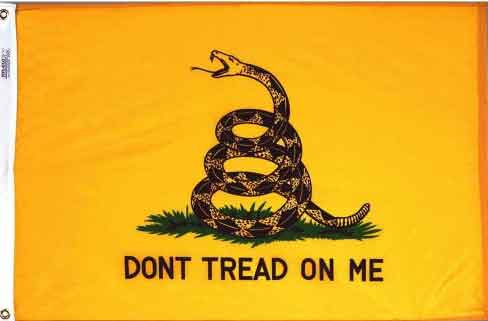 All Star Flags specializes in the high quality distribution and production of all types of flags: United States, individual state, military, international, and custom designs.  All Star Flags also handles in the sale of banners, pennants, banners and signs, and flag accessories.  Their inventory includes a unique selection of previous versions of the American flag. All Star Flags sells only made in USA flag products and distributes nation-wide making it the go-to distributor for anyone looking to have a piece of history.