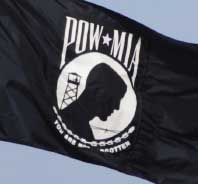 History of the POW/MIA Flag

Today the black and white POW-MIA flag, with its silhouette of a bowed head, set against a guard tower and a single strand of barbed wire serves as a national symbol and a challenge to a country not to forget. The story of its origin at Annin Flagmakers over 30 years ago is one that we are proud to tell.

In 1970 Mrs. Mary Hoff, an MIA wife and member of the National League of American Prisoners and Missing in Southeast Asia recognized the need for a symbol for our POW/MIAs. She read a newspaper article in the Jacksonville, Florida Times Union about Annin Flagmakers that explained how Annin helped to design and subsequently manufactured the flags for the newer UN member nations. After contacting Annin, Mrs. Hoff found Norman Rivkees who was VP of Sales at the time very sympathetic to the cause. He in turn contacted a local advertising agency and contracted graphic designer Newt Heisley to design a flag to represent the group.

The job came just as Heisley’s son Jeffrey was returning from Marine training at Quantico, VA. Home after becoming ill during training, Jeffrey’s gaunt appearance became the inspiration for the silhouette. Newt Heisely, himself a World War II veteran who flew missions in the Pacific, was glad he got the chance to design the symbol and help the group. “I used to fly within range of the Japanese and wondered how I would hold up if I ever got captured. When I did the design, I thought how easy it would be to forget those guys”, he said.

The now familiar slogan, “You are not forgotten”, was born of that sentiment. Heisley also remarked in an interview that the flag was not originally intended to black and white. He figured that once the League selected the design from the several he submitted, a suitable color would be chosen. One less somber, more optimistic, he said. The black and white motif stuck.

Following the League’s approval Annin manufactured the black POW/MIA flags for distribution. The image was never copyrighted and is now part of the public domain.

Today this is one of the five most popular flags sold in the United States.