Flags of the Confederacy: An Overview 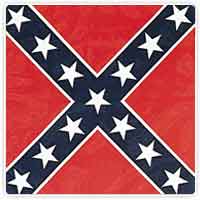 Flags of the Confederacy:  An Overview

In 1861 the seven southern states of South Carolina, Mississippi, Florida, Georgia, Alabama, Louisiana, and Texas declared secession from the Northern States shortly after Lincoln was elected president. In order to show their independence from the rest of America they employed a flag to represent the Confederate States of America.

Like the American flag, the colors red represented fearlessness and valor, white represented purity, and blue represented justice and determination of the people. In the canton, there were originally seven stars on a sea of blue to represent the seven Confederate states, but as more states joined the Confederacy, more stars were added to the flag.

The original seven states were soon followed by Virginia, Arkansas, Tennessee, and North Carolina and became the eleven Confederate States of America. Eventually there were thirteen states in the Confederacy, with the addition of Kentucky and Missouri to the union, although they were not officially conceded. The first national flag of the Confederacy with thirteen stars was used until May 1, 1863.  The version produced even today for the Stars and Bars, or First National Confederate, features the original seven star pattern in the blue canton. 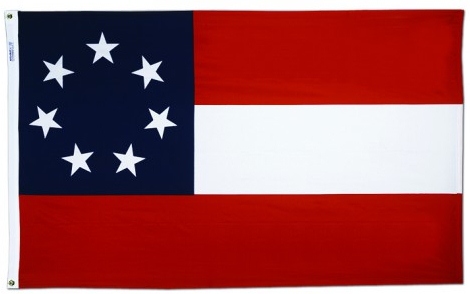 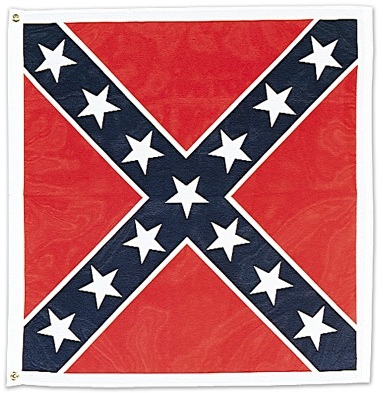 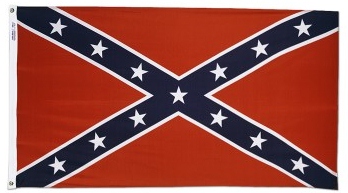 On May 1, 1863, the Confederacy adopted a second design of the Confederate flag that employed the Confederate Battle Flag as the canton on a field of white. The white was a symbol of purity and the new flag became known as the “Stainless Banner”. This flag also posed issues on the battlefield because many mistook it for a white surrender flag. When there was no wind blowing and the flag hung limp, it was difficult to see the Southern Cross in the upper left corner and it appeared as a white surrender flag. 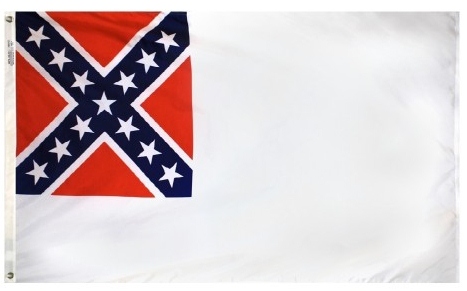 Because the white field on the Stainless Banner was confused as a flag of surrender the flag was redesigned and adopted on March 4, 1865. The new design, known as the “Blood Stained Banner”, had a vertical red bar on the right side of the flag. This flag was only in use for 36 days, as the Army of Northern Virginia surrendered on April 9, 1865. 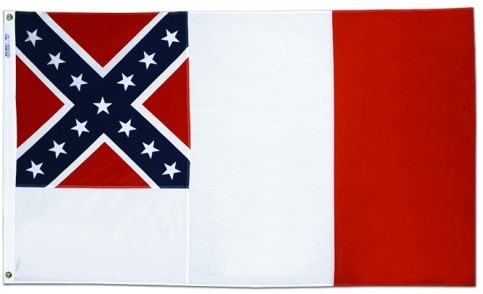 The Bonnie Blue Flag was displayed at the Capital in Mississippi in January of 1861 when Mississippi seceded from the Union.  The flags roots go back to the early 1800's when it was used by the Republic of West Florida when they rebelled against the control of the Spanish government.  A variation of the Lone Star Flag was also used by the Republic of Texas beginning in the mid-1800s.  A song by Harry Macarthy added to the historical popularity of the Bonnie Blue flag which along with "Dixie" were two of the South's most popular songs. 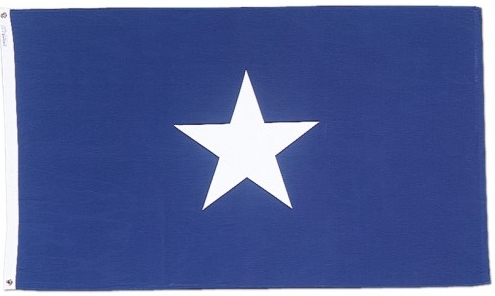 A variety of other flags were also popular during the Confederacy.  There were countless state's rights, state secession, infantry, artillery, cavalry, unit, battle and other flags that were used by the South during the Civil War.

All Star Flags has your favorite flag, with the largest assortment of Historical Flag and American Flags, as well as state, military, religious, feather flags, advertising flags, and so much more! They even have you covered with flagpoles, accessories and event signage. Fly your flag proudly today with the help of All Star Flags.  All Star Flags, Quality in Every Star!