Marking the 10th anniversary of the tragic events of September 11, 2001, the Flag of Honor and the Flag of Heroes have been created in remembrance of all who perished during the September 11, 2001 terrorist attacks. The Flag of Honor will include the names of everyone who perished aboard the airplanes involved in the attack, as well as those who were killed at the Pentagon and the World Trade Center. The Flag of Heroes will feature the names of all Emergency Service personnel who perished in the attack, including members of the FDNY, PAPD, NYPD, EMS, and Court Officers.

All Star Flags is partnering with Annin Flagmakers, the official flag maker for the Flag of Honor, Flag of Heroes Project. A manufacturer of American flags since the 1820s, Annin was a logical choice for this project. From the early days of sewing flags and supplying them to merchant ships from a sail-making shop on the New York City waterfront to today, Annin Flagmakers has grown along with the nation. Throughout American history, multiple world events have sparked American patriotism—the Civil War, involvement in World Wars I and II, the addition of new states Alaska and Hawaii, and the American Bicentennial. So when patriotic fervor gripped the country once again after the tragic events of September 11, Annin continued its efforts to produce the best-quality American flags in the nation.

All Star Flags is proud to partner with Annin to distribute the Flag of Honor and Flag of Heroes. Proceeds from the sale of these commemorative products will be donated to charities such as The Voices of 911, The Cantor Fitzgerald Fund, The National 911 Museum at Ground Zero Flag of Honor fund, and The USO and the Wounded Warrior Project. For more information, visit www.flagofhonor.org. 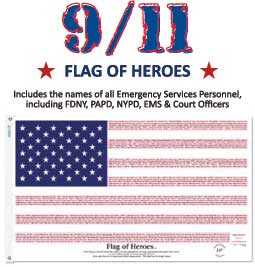