Flags are an essential aspect of a nation's identity. By combining colors, emblems and crests, nations can create a theme that represents the nation over which the flag flies.  From the origin of their use, flags have always incorporated an emblem or design of some kind to signify an entity's identity.  Today, each nation around the world has a unique flag characterized by internationally recognized and unifying colors that represent the country's character.

Flags have been used by countries for thousands of years with ancient designs stemming from Greek, Iranian, and Egyptian design origins.  The first types of flags were called "vexilloids", which is derived from a Latin word meaning "guide".

Original “flags” were carvings on the top of metal or wooden poles.  It was not until about 2,000 years ago that fabric pieces were added to the vexilloids for decoration; the Romans are reportedly the first to have used fabric in their flags.

The Meaning of Colors in Flags

Flags are used to communicate information.  Such as:

Flag communications are intended for comrades and enemies alike. Flags share information through a combination of colors and symbols.  The following colors can take on various meanings in flags:

While colors represent nationality, emblems are used as a means of identification.  Early "flags" were simply emblems on poles and were used for purposes of identity in ancient battles.  Emblems are commonly represented as a coat of arms, which consist of a shield, the mantling, the helm, the motto, and the crest. Many countries' flags still use a coat of arms.

The combination of a flag’s colors and emblems help to establish a flag’s theme, which can be a source of pride or strength and should represent the core values for the nation in which it stands.  Each national flag has its own unique meaning and distinct history.

Unique Flags of the World

The world is divided into seven continents of which six are populated: North America, South America, Asia, Africa, Australia, and Europe.  In general, Americans and like-minded westerners understand what their predominately red, white, and blue flags symbolize, but what about the flags of other nations? Understanding what the colors and emblems on other national flags represent sheds insight into the psyche and cogs of the country itself.

The Gold and Red Glory of Spain

Spain is one of the more well-established European countries characterized by a lust for discovery and adventure.  Spain's flag is a horizontal tricolor in which the top and bottom are red featuring a gold field with a coat of arms flanked by pillars to the left of center.

It is claimed that the pillars in the emblem represent the Pillars of Hercules, which is the mythological name of the Straits of Gibraltar.  The crown that covers the shield or coat of arms symbolizes the monarchy under which Spain is ruled.

Speaking of royalty, the base of today's coat of arms was developed by catholic kings to represent the unification of Castile and Leon.  The eagle of Saint John and the sable with an open crown was also part of the arms.  The coat of arms was changed again at the conquest of Granada and again following the annexation of Naples and Navarra. 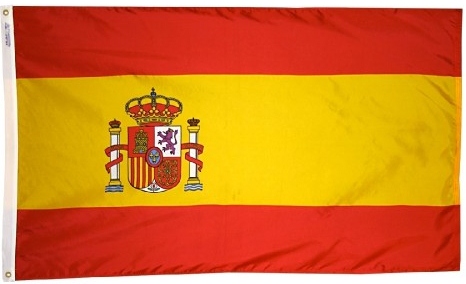 Unlike Spain, the Republic of Kazakhstan is a relatively new country having claimed independence in late 1991 after having once been under the direction of the Soviet Union.  The Kazakhstan national flag represents a deep, nomadic history; the sky-blue field of Kazakhstan’s flag represents the unity of the Kazakhstani and Turkic people as well as Tengri, the god of the sky of early Turkic religion.

Atop the field is a golden sun under which, an eagle closely flies (eagles are native to Kazakhstan).  There are 32 sunbeams eschewing from the sun in the center.

The staff itself dons the Kazakhstan emblem, which features the same sky blue and gold of the flag as well as the sunbeams.  The circular emblem is a “shanyrak”, which looks like ornate wings flanking a golden circle and its sunbeams on either side.  Like the flag, the emblems symbolism is life and eternity, family well being, and peace and calm. 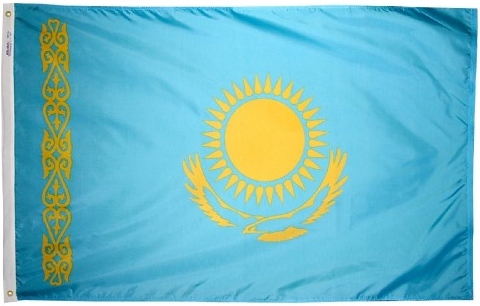 The tropical island nation of Fiji officially adopted its national flag in 1970.  Like Kazakhstan’s flag, Fiji’s flag features a field of sky blue representing the ocean and Fiji’s trade and fishing industry.  The Union Jack sits in the upper left-hand corner, which symbolizes the fact that Fiji was once a colony of the United Kingdom.

The emblem to the right of Union Jack is Fiji’s coat of arms.  The shield appears only on Fiji’s national flag.

The shield is red and white (similar to a St. George’s Cross, which is part of England’s national flag).  On top of the shield’s red top is a lion holding a coconut.  On each of the four cross quadrants below are “agricultural specialties” of the country.

Each of these symbols represent Fiji’s natural resources and its aspirations to renew itself as a nation. 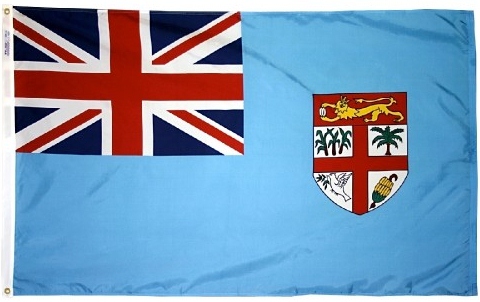 The Flag of Uganda

Another interesting flag that prioritizes nature in its emblem is the flag of Uganda, adopted in 1962.  Six horizontal stripes of black, gold, and red make up the flag with the black representing Uganda as part of Africa and the gold symbolizing the regular sunshine Uganda gets for its proximity to the equator.

In the center of the flag is the crested crane, the nation’s bird.  The crane is part of Uganda’s official crest and is a symbol of the friendly, peaceful, gentle Ugandan people.  It stands to the right of a traditional spear and shield. A Kob left of the shield represents Uganda’s abundant wildlife. 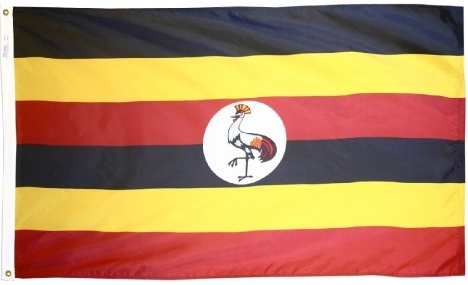 A World of Flags

There are many other interesting flags representing countries with equally long histories.  Though a nation might be well established, its flag can change as a nation’s structure, leadership, and priorities change.  Owning a flag is a way to not only represent national pride, interest, or heritage, but it is also a way to own a piece of history.

All Star Flags is a well-established family-run business that reputably provides flags and flag accessories around the country.  All Star Flags is a dealer of major flag manufacturers, and their large inventory of quality merchandise includes a variety of national flags, which are perfect for decoration, entertainment, or collections, or for showing pride in one's home country.  As a company that prides itself on exemplary customer service and lots of options, All Star Flags is a one-stop-shop for everyone's flag needs.