Five flags are on display today at the US Capitol for the 57th Presidential Inauguration. The current 50-star American Flag is centered with historic versions of the American Flag on each side. Moving out from the center 50-star flag are two 21-star American Flags. This was the flag from 1819-1820 and the 21st star represented the state of Illinois joining the Union. President Obama represents Illinois so this choice is appropriate. The two end flags are the 13-star Betsy Ross flags. The staggered 13-star flag was the first officially adopted design but the Betsy Ross 13-star flag is a more common visual representation of the original 13 colonies flag. All 3 versions of the American Flag on display today at the Presidential Inauguration are available year round on our website at www.allstarflags.com.
#inaugurationflags

MSN offers a neat info-graphic on the Inauguration Flags 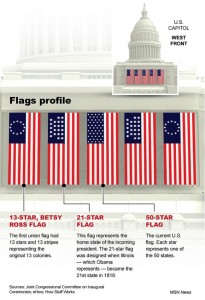 This entry was posted on Monday, January 21st, 2013 at 12:24 pm and is filed under All Star Flags News. You can follow any responses to this entry through the RSS 2.0 feed. You can leave a response, or trackback from your own site.